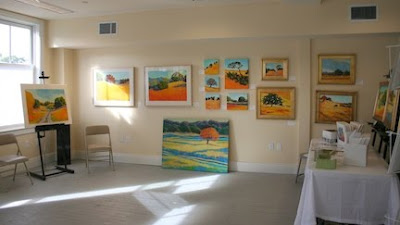 View of some of Karen Lynn Ingalls's paintings
at the Calistoga Art Center, during Napa Valley Open Studios
Our second four–week fall Acrylic Painting class session begins this week, with classes on Wednesday, September 29th, from 1 to 4 p.m., and on Friday, October 1st, from 1 to 4 p.m.
If you're new to the class, you can find out more, and enroll, and download a materials list, at http://www.calistogaartcenter.org/adultmatureteenclasses.html. I look forward to seeing you!
If you'd like to see something of what you might have missed during Open Studios, if you weren't able to stop by, you can see these posts at my painting blog, Karen Lynn Ingalls: Line, Color, Paint, Joy:
Napa Valley Open Studios 2010 - first weekend
The magic of light
Napa Valley Open Studios 2010 - second weekend
Posted by Karen Lynn Ingalls at 1:51 PM No comments:

The Birth of Impressionism - my favorites 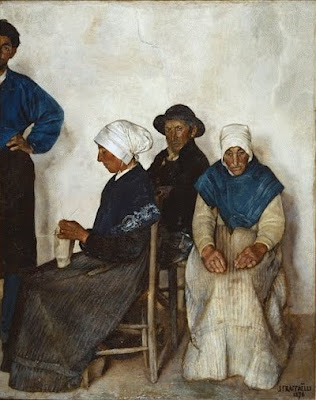 The Family of Jean-le-Boîteux, peasants of Plougasnou • Jean-François Raffaëlli, 1876
San Francisco's Birth of Impressionism show not only set the context for the beginnings of French Impressionism, and, ultimately, the revolutions in painting that sprang from it, but it included many paintings not often seen.
Jean-François Raffaëlli and his work were new to me. A contemporary of the Impressionists, he had a landscape painting accepted into the Salon in 1870, when he was only twenty years old. He then turned towards realism, painting the people of his time with an unsparing honesty quite the opposite of idealized salon painting. This painting of a peasant family from the exhibit particularly struck me as contemporary. The composition, with the figure on the left cropped in half, the arrangement of the figures agains a flat wall, and the suspicious, sharp look of Jean-le-Boîteux, seemed very modern. Painted on a heroic scale, the figures themselves are not heroic, but instead worn and work-hardened. 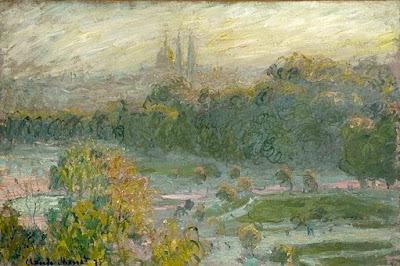 The Tuileries • Claude Monet, 1875
Another favorite of mine from the show was Claude Monet's The Tuileries. I can't find any images online that capture the beauty and subtlety of its color - greens and pinks and yellows that sang.... He drew the sense of the trees with lovely loopy brushstrokes that enchanted me. 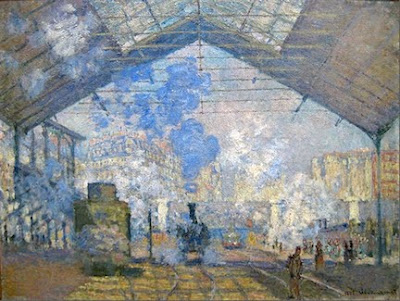 La gare Saint-Lazare • Claude Monet, 1877
La gare Saint-Lazare, painted in 1877, was another surprise. Although I'd seen it reproduced in books, I had no idea of the wonderful subtlety and brilliance of the colors. Monet could scumble like nobody's business. Trust me, this lovely little image of it does not do it justice. 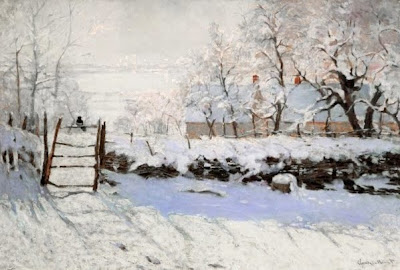 The Magpie • Claude Monet, 1869
The Magpie was a painting of Monet's that I did not remember seeing in books before. A docent said that, at Museé d'Orsday, reproductions of it sell more than those of any of their other paintings. I was unexpectedly charmed, and could understand why that was so. Again, it had a subtlety and variety of color that reproduction cannot manage to convey. Monet used his artistic license, too, in reversing the shadows of the magpie and part of the gate (hey, the composition works better that way). A good reminder: never let reality get in the way of a better composition! 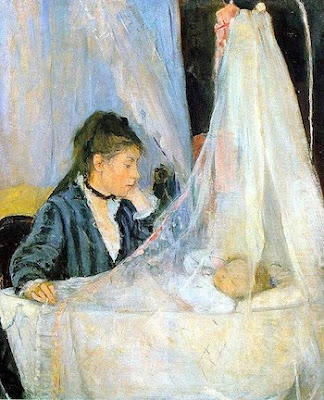 The Cradle • Berthe Morisot, 1872
Another painting that was a wonderful surprise was Berthe Morisot's intimately-sized The Cradle. Again, the subtlety and variety of scumbled colors, the beauty of the composition, the delicacy of the line and the sheer drapery above the sleeping child and more wowed me. It's easy to think of both this painting and The Magpie, because of their subject matter, in sentimental terms, but the strength of each makes them far, far better. Don't dismiss either.
Posted by Karen Lynn Ingalls at 3:34 PM No comments:

Van Gogh and the Colors of the Night

Landscape at Twilight • Vincent Van Gogh, 1890 • collection of the Van Gogh Museum in Amsterdam
Van Gogh and the Colors of the Night is a current show at the Museum of Modern Art in New York. Although these paintings won't be among those coming to the de Young Museum in its second exhibition of Impressionist and post-Impressionist paintings from Musée d'Orsay, they may give you a foretaste of what is to come.
You can see more of Van Gogh's night paintings at www.artdaily.org.
Posted by Karen Lynn Ingalls at 3:00 PM No comments: